Published by Alessandro Violante on September 7, 2019

SHITPUSHER is the embodiment of decades of depravity and living the lowlife! ALL THE PUSHERMAN EVER WANTED WAS A HUG! He fanatically pushes shit along to any and all the mindless drones that will listen! I would call it outsider art / musique brut but that would be too contrived!!

P.K.S is about disengagement. I want to see how far I can opt out of the system. A naive enterprise you might think? Only time will tell!

over the decades proved to be another enterprise of manufacturing rebellion to the middle class suburban youth consumers. That said it still serves a vital purpose as a gateway to TRUE DEVIANCY! I participate in it mainly as a fashion entity (BLACK LEATHER FOREVER) as the music as a whole is pretty lacklustre- “Three shitty chords and FUCK YOU!” is pretty stale at this point! Give me my Beat Boxes and Multi Channel Installations!

is one of the dwindling outlets for raw expression in the music biz. Embracing and exploiting what the leading industry professional musicians deem as incorrect and maligned… Exemplified by things I’ve read over the years like “just some shit through a distortion and delay pedal” “Talentless shit by pretentious hipsters” etc. Of course like everything else its rife with cliches and 99% is trash but I firmly believe there is still more opportunity for originality in that 1% than the majority of the other defined music genres … 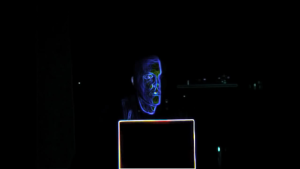 Well I do believe with Carl I can completely abandon structure and conventions and descend to the ridiculous! I sometimes wonder if he actually listens to this shit as he seems to be endlessly dubbing tapes! Maybe he’s good at multi-tasking?? Zhark is of course more defined and is becoming to my mind more of a neo-classical entity with some obligatory bangers thrown in so we don’t get too austere! I consider it the Deutsche Grammophon for the goth industrial techno crowd!

hmmmmm Well I’m told that there is some of that out there in the industry. Only way to flourish is hustle that ass into the club and festival circuit with a booking agency that can get you scale+ fees! Otherwise it’s an expensive vanity pursuit and an excuse to normalize ones addictions until rehab or retreating back to the REAL WORLD! THE STRUGGLE IS REAL…