Dialectic – Takes one to know one

Published by Davide Pappalardo on October 3, 2020 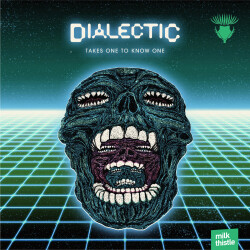 akes One To Know One is the third venture in the world of Patrick Sharples aka Dialectic. Coming after the Eps Pregnancy Suits You and Better Than Lego, this new 6-track output is a further evolution in the exploration of rhythms, atmospheres, sound-design and sources, and this time things get very personal.

Every track has a meaning rooted in Sharples’ own life, in a specific element, memory, person. This fact goes beyond pure concept: the structure of the tracks themselves revolves around this theme, as well as choices of implemented effects, sounds, samples, even rhythmic progressions.

The title of the album comes from the book In The Realm Of Hungry Ghosts by Gabor Mate, a physician who worked in Vancouver supporting people with serious drug addictions. This is no by chance: Sharples explores the correlation between addictive and obsessional behaviors from addicts and the ones from composers like himself.

An interest in building greater empathy and connection with others linked to his activity as a social worker in adolescent mental health/substance abuse, too. Something present in the artwork too, with the circle of a head eating a head, eating a head, without ending.

This is well empathized in the title-track, an emotive roller-coaster starting with almost funky bass sounds and marching rhythms, soon reached by simple but effective melodies. The looping elements return in an obsessive way, while new ones are added amidst the course of the track in a constant change of mood. The game of beats and synths is not new in Dialectic’s mythology, but there is a more cohesive sense of purpose than before.

You’ll thank me later starts with a sort of digi-tribal mantra, enriched by a vocal samples many gamers from the 90’s will recognize: it’s Duke Nukem, the protagonist of the eponymous series of games.

Once again, not a casual element – the track is dedicated to Sharples’ brother, a formative figure for his musical development, with whom he played the game Duke Nukem 3D. So, life and music are intertwined in an “idle techno” track based on droning rhythms and retro synth moments.

Shoshin is another autobiographical episode, this time dedicated to Sharples’ father, who taught him the values of mindfulness when he was 17 years old, and is featured at the end of the track. The name comes from Zen Buddhism, meaning Beginners Mind, and relates to the importance of non-judgment in mindfulness practice.

Accordingly, the music is quite hypnotizing and calm in the beginning, a communion of steady syncopated rhythms and subtle groves. Then, sudden crescendos give us more robust drums and racing sounds, like fast thoughts entering one’s mind during meditation.

Sorry ( I can’t be in the band anymore) is an exploration of the nature of the work of a solo composer, a track citing in the title the author’s three year old son. Lively rides, bass sounds and beats concur to a game of hide and seek, giving us a playful texture which grows into a minimal march reminiscent of videogames’ soundtracks, as well as 90’s IDM tanks to ambient pads.

Another example of rhythm and melody perfectly integrated with a clear purpose.

Idle dad rap is a fine showcase for the interaction between the technical side of Sharples’ music and his own life and biography. The title is an anagram for Paradiddle, a group of four drum beats produced by using alternate sticks in the pattern right-left-right-right or left-right-left-left, a technique used during the course of the track.

At the same time, we find a sample coming from Home Alone 2 which works as both a reference to the author’s childhood and an indication for the break in tempo and the build up in the second half of the track. The result is a track heavily based on rhythmic mantras and looping keys, slowing down and adding solemn atmospheres during its second half.

Lean into the discomfort ends our journey with a frenetic vibe full of hard kicks and throbbing lines, probably the more energetic number on the EP. Claps, hats, cymbals move amidst almost acid atmospheres, while audio samples from the video game Perfect Dark once again remind us of Sharples’ childhood and refer to his own underlying fear of death and desire to create so-called “mortality projects”.

The title comes from the work of Texan social work researcher and educator Brené Brown, dealing with the need to overcome and live with discomfort in our society and daily lives. Themes sonically expressed in the sense of urgency of the music and structure of the track.

Takes One To Know One takes the strengths of Dialectic’s previous works and use them to craft an ambitious work centered on his own life and interest in rhythmic music. Two faces of the same coin, tools for a narration without words, the challenge of saying something opening up to the listener via instrumental music. At the same time, the artist doesn’t forfeit the pleasure of music in itself, conceiving sonic textures and a strong songwriting with hooks and grooves. An important chapter in his ever evolving voyage.