Published by Alessandro Violante on February 3, 2020 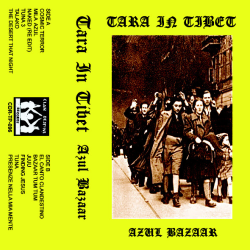 When Nam June Paik showed his modified CRT monitors and his prepared pianos in the context of Galerie Parnasse in Wuppertal, during his first exhibition entitled “Exposition of music – Eletronic television” creating what would have been defined as video art, he made an early example of manipulation of television image. Thanks to this experiment the artist, after having studied music composition for years with John Cage among others, discovered that it was impossibile yet useless to control the television image. And upon this element of chance built his artistic career. This artist, being South Korean, also put at the center of his art the dialogue between Eastern and Western cultural exchange.

What does the art of Nam June Paik has in common with the music of Tara In Tibet, one project of Alessio De Felice now put on hiatus? It should be said Alessio De Felice is now active as No Nation and he’s part of She Lost Kontrol and Creative Institutes labels. If we think about his last release Azul Bazaar released by Clan Destine Records, surely two connections can be traced, the first one being the aforementioned connection between Eastern and Western culture.

Sometimes, in Tara In Tibet’s music there’s an interest for a research on the connection with a spirituality recalling the East, evoked through those hypnotic rhythms borrowed from Esplendor Geométrico‘s music. While listening to the openere Cosmic Terror, the listener is captured by the engaging rhythm put in a ritualistic context. Nevertheless, if compared to his previous release The Sacred Circle Of Lucia, where the influence of the Spanish duo can be found in almost each song, in Azul Bazaar, that’s the only song in which this can be perceived. From the second song on, different influences can be perceived such as that of The Klinik and Portion Control.

The second element shared by Nam June Paik and Tara In Tibet is the thought, be it conscious or not, on the unstable characteristic of the medium used to generate their art. On the one hand there’s the analog signal, on the other hand there’s sound. As in Nam June Paik you can perceive the element of change, be it caused by a damage (Zen for Tv), or by magnets (Tv Magnet), often, when listening to Azul Bazaar, the listener will find what can be classified as the punk approach of the musician – a raw sound in which chance has an important element. An imperfection breaking the rules of what some criticize as the perfection of electronic sound. First of all, Tara In Tibet is a punk more than an electronic project in spirit, with the only difference Alessio plays synthesizers, drum machines and so on, and that’s an aspect giving something more to his music. It’s his trademark which has found its natural evolution in the music composed as No Nation, something linking his music and the theories elaborated by the aforementioned John Cage.

The opener song isn’t the only connection with Esplendor Geométrico. Also song titles as Bazaar tum tum and his spare “vocals” in Presenze nella notte evoke the Futurist Zang Tumb Tumb and the use of freeform speech typical of the avantgarde movement run by Marinetti at the beginning of XX° Century.

Those aforementioned songs are just a bunch of the good genuine ones the listener will find within this tape release. Think about The desert that night, an alienating, crude and visionary dark ambient tune, the perfect song put in the middle of the release to separate the first from the second part of the release.  More noise-tinged tunes such as Talako and El canto clandestino are true bangers highlighting with blasts of raw beats and noise layers, the primordial element of Tara In Tibet’s music – also thanks to the practice used by Alessio De Felice to record what he plays with his gear without further reworks.

Azul Bazaar reflects the personality of Alessio De Felice, a musician, artist and person, an “electronic punk” who always looks straightforward and who really likes to make music and to express himself through it.