Tara in Tibet – The sacred circle of Lucia

Published by Alessandro Violante on April 7, 2019 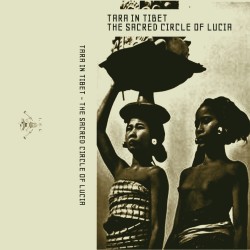 In a music scenario radically changed by social networks, platforms for music sharing, and in a broader sense by the digital revolution and by Internet, the work done by Alessio De Felice / Tara in Tibet and by the label Last Europa Kiss, seems to be an act of rebellion against music production and distribution’s system, and at the same time an invitation for the listeners to take back a deeper and more aware way of listening to music, opposed to our time’s fast and ephemeral ways of assimilation due to digital music.

Last Europa Kiss, as well as a plenty of young and interesting labels recently emerged in the industrial side of techno music, cannot refuse the online distribution of its music. Although The sacred circle of Lucia has been released on tape with only thirty copies, it’also available on the Bandcamp page of the label as a digital release.

The sacred circle of Lucia is a sonic lightning, something through we can recover the contact with a inner reality, thanks to the use of primordial rhythms and noise-sounds.

A rediscovery of the primary sonic elements; a physical, engaging and evocative music, and a meeting point for Eastern and Western culture. It’s a spiritual journey built by a shaman-artist having a message to express and to communicate to the listeners, “talking” about deep, uncommon, philosophical topics through his essential rhythm-driven songs.

The primordial and punk approach of Tara in Tibet’s music is highlighted and enriched by some sonic imperfections, direct result of the songwriting and recording processes used by the artist. He records his songs without any further studio adjustment.

An immediacy which is also expressed during his live performances, when music and body melt together,  throwning it to the audience without any filter, also recalling here the experiences of early industrial music pioneers, such as Esplendor Geométrico – one of the most important influences of the musician.

If the duo run by Arturo Lanz and Saverio Evangelista is a clear source of inspiration and a basis for comparison for Alessio De Felice’s music, in The sacred circle of Lucia his love for techno music can also be found (such as in The offering to the non God), as well as that for Absolute Body Control (Origins) and Dive (Splendore EU ropeo). Ten sonic snapshots having their unique traits, each linked with each other by a clear fil rouge.

This “new wave” of labels and artists sharing a common love for old school aesthetics and music formats such as tapes and vinyls, as well as for the rediscovery of a punk and DIY approach and a more aware approach to music listening, finds in Berlin one of its epicentres.

Last Europa Kiss and Tara in Tibet are entities among others, genuine parts of a broader, fresh, engaging, puzzle. Tara in Tibet is also a member of She Lost Kontrol and the UNTIL DEATH KOLLEKTIVE. What’s really important in The sacred circle of Lucia is the experience lived by the listener, more than one or another song per se.