Neraterræ – Scenes from the sublime

Published by Davide Pappalardo on May 6, 2020 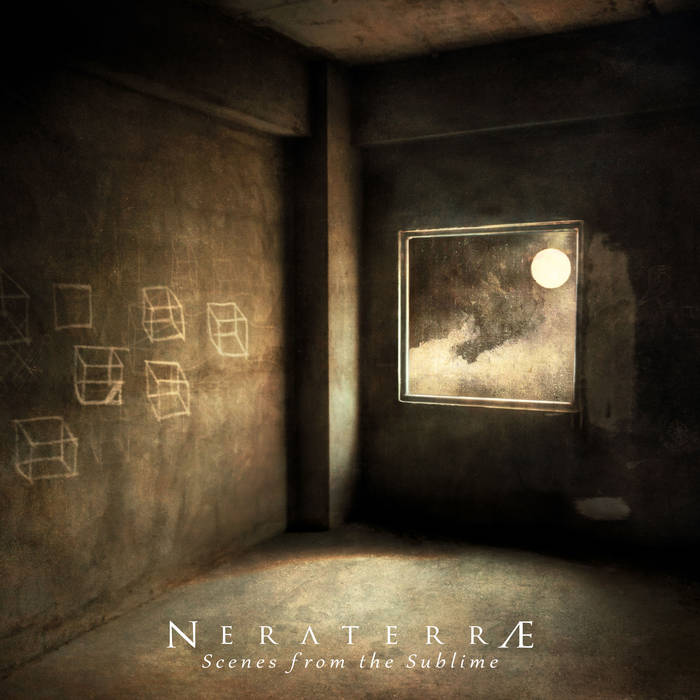 He now returns with Scenes From The Sublime, further exploring the concept of collaboration, this time with Alphaxone, Dødsmaskin, Leila Abdul-Rauf, Mount Shrine, Phelios, Phragments, Shrine, Xerxes The Dark, George Zafiriadis from Martyria and Yann Hagimont from Cober Ord. There, an interesting motif behind every track – the love of beauty and the sublime, incarnated in actual paintings which are referred in the compositions. An artistic project transcending the barriers between sound and visual experience, synesthesia proudly displayed.

The last abjurer sees the help of dark ambient German musician Martin Stürtzer a.k.a Phelios, in a track Inspired by Zdzislaw Beksinski’s AA72. The painting is a masterpiece of modern art, dated back to 1972, an epic and dark image, rich in yellow and brow colours, where the glory of past’s dead generations seem to tower us, modern viewers. It’s only apt that the music is orchestral and cinematic, rich in dark ambient drones and evocative motifs where subtle percussion and mesmerizing synths conceive a slow but captivating movement recalling distant eons and the mysteries of time.

Fate unveiled is inspired by Hieronymus Bosch’s Visions of the Hereafter, and is a track in collaboration with the Norwegian duo Dødsmaskin. Bosch is famous among the lover of art for his wild fantasy and his representation of the netherworld as a bizarre and alien dimension, in reality referring to many aspects of society and culture of his time (1500). The polyptych in two panels inspiring the episode sees dark variations of black, green, yellow and red, and the same images are here evoked by abyssal ambiances and eerie effects, in a spiraling sound collapsing in shrilling moments. All of the sudden, a beautiful melody pervades us with melancholy, enriched by reversed effects and noise-tinged distortions. Dark ambient, classical music, drone are united in a well conceived journey.

In deafening silence is based on Ilja Yefimovich Repin’s Ivan the Terrible and His Son Ivan, and features Slovakian martial industrial/dark ambient duo Phragments in a ritualistic rendition suspended in time, full of pathos. Let’s think to the painting: Ivan is desperate, he has just beaten his son to death in a fit of rage. Rage encapsulated in the color red which dominates the painting, while the clam face of the victim, a quasi-saint, contrasts with the delirious expression of the Tsar. Accordingly, the solemn sound slowly indulge itself in static drones, until dark ambient tones and sudden shrilling effects reach the composition. Moments of tension in a moment fixed in time, a tragedy collapsing in brooding noise during the finale.

Thou, daemon sees vocals by Yann Hagimont from France dark ambient/pagan folk project Cober Ord and George Zafiriadis from Gree ritual ambient duo Martyria. It is Inspired by Francisco Goya’s The Exorcism, a painting well fitting his world made of demons, occult, witchery. Famous for his late-life Black Piantings, here we find a dark atmosphere with dark colours and a visionary, oneiric scheme. The music follows suit with eerie ambiances and creepy vocal deliveries, soon conquering the scene with demonic innuendos and shrilling verses. An ominous dark ambient motif guides us in a cinematic crescendo, giving to us an access for a world made of phenomena beyond reason and rationality. The last part consumes itself in a droning ending.

Passion domain features Brazilian drone artist Mount Shrine a.k.a Cesar Alexandre, in a work picturing in sound Caspar David Friedrich’s Wanderer Above the Sea of Fog. The famous painting portraits a man standing against a foggy horizon, probably on Elbsandsteingebirge, using a mix of blue, pink, gray, yellow in order to represent the fog, and opaque colors for the rock. The power and mystery of nature is here showcased: the music pays homage with a field-recordings-like motif overreached by subtle noises. The track evolves with hints of melody and orchestral crescendos, slowly showing itself like distant images in the fog. The listeners find themselves engulfed by a potent pathos in a grandiose climax which slowly descent into nothingness in the finale.

The unfathomable lives again sees the help of Iranian dark ambient Xerxes The Dark and Yann Hagimont from Cober Ord on lithophone. The inspiration here is Johann Heinrich Füssli’s The Nightmare, another famous opera wondering in dark colours and oneiric, occult atmospheres. Inspired by medieval paintings, the author uses shadows and sparkles of colour, with brown, red, white motifs, in a bright upfront and a a darker background. A strong visual impact full of alarming emotions, fully displayed by the progression of a dark ambient intro ready to crawl with obscure sounds and sharp effects, evolving in a cinematic drone showing itself in the composition. An ominous atmosphere reaches almost surreal tones, in a shrilling orchestration slowly decaying away.

Doorway to the I features Iranian experimental project Alphaxone in a drone/ambient affair inspired once again by Zdzislaw Beksinski, this time by his painting AE78. We find ourselves again in his strange world, but this time with more colours and more vivid tones. An almost alien structure with a baby-blue core stands out a red/yellow landscape, evoking autumnal images. The thunder-like intro of the track recalls the image presenting itself in front of us, and the mysterious sounds the impact of its vision. Eerie effects and drone elements conjure a shrilling loop in a diaphanous movement; a window to another dimension, in a Lovecraftian idea of something outside of our perception and reality. A peaceful intercourse prepare us for a static sound, upon which the final drone is conceived.

The collapse of matter and time is a solo episode rooted in the images of Salvador Dalì’s The Disintegration of the Persistence of Memory. As the painting is lively and 3-d like, showing the whimsical nature of the Spanish multi-artist with a landscape flooded with water, it depicts what is occurring both above and below the water’s surface. Floating brick-like shapes represent the breakdown of matter into atoms, telling us about the fragility of reality and its rules. It’s not by surprise that the sound of a clock introduces dark ambient motifs in an ethereal dimension, still in time. Subtle noises in the background evoke the passages of eons, while the obsessive drone condemn us to eternal stillness.

Towards oneiric truths is a feature with American artist Leila Abdul-Rauf, inspired by Arnold Böcklin’s Isle of the Dead. Here we find a solitary island rising from the sea, with a bay that opens towards us. All the elements, the colours, the symmetry, concur to an atmosphere of stillness and mystery. Thus, the track starts with the sound of the sea, while ominous whispers from another world are heralds of delicate notes and soulful ambiances, in a crawling orchestration. Glimpses of choruses and sonorous melodies conceive a dream-like sonic world, an oneiric voyage perfectly fitting the theme of the work. And as it started, so it ends: with the sound of waves, guiding us toward the mystery.

Virtues of the dawn is the last track, a collaboration with Bulgarian ambient project Shrine, inspired by Joseph Mallord William Turner’s Light and Colour (Goethe’s Theory) – The Morning After the Deluge – Moses Writing the Book of Genesis. This not a dark painting by any means – contrarily, an explosion of light exploits the warm side of the spectrum., celebrating God’s Covenant with Man after the Flood. There is a lot of symbolism, as the brazen serpent raised by Moses in the wilderness as a cure for plague, here representing Christ’s redemption of Man in the New Covenant. The grandiose theme finds its realization in synth-sounds full of pathos and suave suggestions via sparse distortions. A revelation coming in music, growing with beautiful soundscape, but presenting in its second half a digression taking us to a world of silence.

An ambitious work where music and images collide in an artistic vision mixing the senses and the ethos of the various artists, living and dead, here involved. The sounds conceive a score for paintings coming from different times and authors, in a sensitive reinterpretation and reaction to the stimulus perceived. As a person could describe the paintings by word, so the musicians do it by music, at the same time creating new works as sonic endeavors. The concept of collaboration beyond even the distance of mortality and life itself, in a celebration of the everlasting soul of art itself.