Published by Davide Pappalardo on August 28, 2019

Silent EM is the coldwave/synthpunk /proto-EBM project of American artist Jean Lorenzo dedicated to a minimal sound fusing the past and modern tendencies. We had a chat with him about his last output The Absence, his influences and inspirations, his collaboration with Ortrotasce, and his plans for the future. 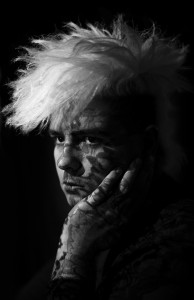 First of all, thank you for your time with us. Silent Em is one of the most prominent projects in what we can call the modern neo-EBM scene informed by post-punk and synth music. You’ve been active for some years, presenting a personal sound with engaging rhythms and eerie, melancholic atmospheres. Would you like to further elaborate about your music and how it all started?

Thank you for reaching out to me. I never intended on making electronic music, but I had to find a way to write on my own while I met people in New York City, it just happened to stay that way. I lived in Miami, Florida, where I had Punk and Post-punk bands, then in 2010 I sold my guitars and moved to NYC with a 1981 Mattel Synsonics drum machine that a friend found in the trash. In Florida I followed blogs like Systems of Romance, Crispy Nuggets and A Viable Commercial, which showed me a lot of obscure electronic bands, but I got inspired to make this kind of music when I started going to Wierd nights (of Wierd Records…RIP) almost every Wednesday, where I could go see live shows of Martial Canterel, Automelodi, Led Er Est, Frank Alpine, Epee Du Bois, etc. Then in late 2010 I bought my first synthesizer, a Korg DW8000, and Shawn of Led Er Est sold me an Alesis MMT-8 sequencer (or traded it for a beer, can’t remember). I just wanted to keep making Post-Punk really.

Your last album The Absence follows suit with your past works, mixing effectively old-school synths and a brooding sense of aggression which underlines the captivating melodies. I always liked your vocals for the many different emotions they can express at the same time: rage, melancholy, disgust, love. I think they shine even more now with a newfound balance with music. What do you think about it? How was the album conceived?

After some years I think I have finally reached a confident stage for Silent EM. ‘The Absence’ is a result of this – the abandonment of emotional restrains and whatever was left from my Catholic upbringing. I also now embrace the fact that my work doesn’t fall into a specific genre (its funny when people try to label Silent EM, saying I’m not Post-Punk because I don’t use guitars, or that I’m Goth, or not Punk. I think I’m all and none). I had written more than 20 songs for this record, which I narrowed down with the help of my close friend Nick Mariano (aka Crispy Nuggets) and Disko Obscura. In November 2018 I went to Los Angeles to record with Matia Simovich at Infinite Power Studios, who really understood my sound and produced this album brilliantly. All this thanks to Disko Obscura, who believed in me and made it all happen. 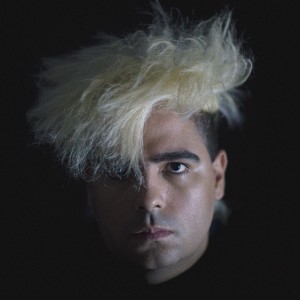 What themes do inspire you? Personal life? Fiction? The world we live in? Your lyrics seem very personal, but at the same time graced by an universal appeal.

Silent EM is 100% out of my subconsciousness. From the music to lyrics, therefore it all feels and is very personal. I write about real love memories as well as fictional, about specific political stories as well as general critiques of abuse of power and how poisonous most aspects of religion are. My writing process is very chaotic, they’re collages of things I record and write every day – sequences, sentences, drum beats, words, chords. It’s like building a puzzle while being blindfolded. I can’t remember how I write any of my songs.

I would like to know about your influences in music. I can hear a little bit of 80’s darker side of synthpop, early post-punk, minimalwave, and of course the militant rhythms of EBM/electro-industrial.

90% of the music I listen to is from the 1980’s, then the rest ranges from 70’s, 90’s, classical and very few contemporary. Bands like And Also The Trees, The Sound, The Chameleons, Opera De Nuit, Data-Bank-A, In The Nursery (too many to list). Coldwave (the French 80’s, my favorite), Goth, C86 Indie Pop, Shoegaze, Punk, some EBM / industrial, Classical, Synth-Punk, and more. Lately I’ve been gathering influences from classical composers and even Arabic

What do you think about the current scene? Is there in America an interest toward this kind of music, which in the past was more of an European thing? I think as of now there many new projects in the U.S.A and Canada rediscovering these sounds and giving a new life to them.

The internet has made it possible for this kind of music to spread world-wide, where in the past it was more European, yes. The positive aspect is that the platform is bigger as opposed to a decade ago, and now a lot of these subgenres are more accepted, more people come out to shows, buy records and share the music. However, I think It also created a lot of saturation, sometimes it feels like anything “dark” is automatically celebrated. A lot of it feels too comfortable and non-challenging too – the “mysterious” vocals, predictable chord progressions and drum patterns, also lately a lot of screaming I noticed (for some reason).

You collaborated in the past for the album Common Loss with another great act, Ortrotasce a.k.a Nic Hamersly. How was this experience? Would you like to do another collaborative album in the future?

Ortrotasce is one of the most underrated contemporary artists in the scene, and I don’t say this because he’s a friend, I really admire his work. Nic and I have tried making music together for a while and have some recordings that were never finished. I’d love to make more music with him, it’s all a matter of distance, to be honest. Maybe I should take a trip to Florida so we can write for a few weeks. 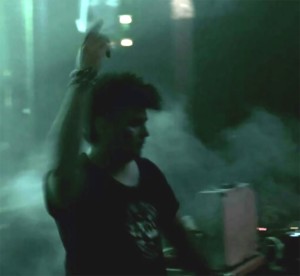 Tell us about your concerts; do you enjoy playing live? Do you think it permits a different dimension for your music?

I used to hate playing live but now I enjoy it. I think it’s a combination of technical upgrades and not giving a fuck anymore about what I should or shouldn’t sound like. It definitely shows the truest form of my music since I get to show that character in public, you know, we all have different characters in our lives. It’s finally changing from stressful to therapeutic.

So, what are your future projects? Do you have any tour in mind?

I still miss having a band and playing guitar and bass, so I started one with 2 friends here in New York, it’s on the classic Goth and Post-Punk side (I will announce it soon hopefully). I just came back from touring the East Coast USA and Canada with Ortrotasce and Disko Obscura, but I plan on going back to Europe very soon and playing the West Coast here.

Thank you again for this interview. Anything you would like to add for our readers?

The Absence has now European distribution via Kernkrach records in Germany. Thanks to everyone who has purchased it so far!