Published by Alessandro Violante on January 1, 2019 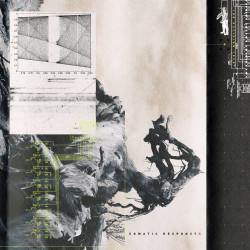 There weren’t doubts about the fact Somatic Responses are experts in the art of the sound synthesis and IDM music, nor about that they are very prolific musicians. Their third album The Decision Tree proves it once again, released in 2018 by the netlabel Acroplane Recordings after the release, in the same year, of a self-released album entitled The Crunch and of Pattern Finding by Stefan Alt‘s Hymen Records (a sublabel of Ant-Zen). This last one has been conceived as a sort of collection of b-sides excluded by Pattern Seeking, the album released the year before.

After several albums and EPs with important labels such as Ad Noiseam, the aforementioned Hymen Records, Acroplane and, during their early days, several other hardcore techno labels, Welsh brothers John and Paul Healy have acquired great experience and sound mastery.

In case you didn’t know about Somatic Responses before, The Decision Tree is an album which, once again, highlights the great love the duo has for synthesizers and analogic gear. Let’s consider titles such as Love like a quad env.

This album expresses a different facet of their music, a more complex, atmospheric, melodic and “vintage” version,  partly recalling the nineties. The old school mastering makes these songs sound less heavy if compared to their releases released by Hymen.

The Decision Tree is quite a huge album, which requires time from the listener in order to be fully understood, a genuine exercise of style, conceived not for the dancefloor, although it keeps the rave dark. Instead, the listener is immersed into an all-encompassing experience, thanks to the wideness of the sound spectrum here used.

That aforementioned vintage feeling highlights the nineties influences of the duo, such as that of classic Warp Records‘ artists as Aphex Twin and Autechre, among others. But also hardcore techno and rave music influences are clearly perceivable here. Think about Lightning on Jupiter and Astra2KIX160, just to name few.

A voyage through time and their roots, as highlighted by the aforementioned Lightning on Jupiter, a travel through a distant planet, and Keep the rave dark, a fast and astonishing manifesto. Specktro, which slows down the tempo for a bit, is a calmer yet engaging voyage through the islands of the net, to quote Bruce Sterling, accompanied by vintage melodic synth line.

The dark Heuristic outputs has a cinematic and broodier mood, alternating complex syncopated very fast rhythms and calmer, atmospheric moments, as often happens within the record. A constant dialogue never bores the listener, until he reaches the abyss.

The opener, Signs of weakness, is a perfect example which sums up the sound found into this album: several layers are juxtaposed, a dialogue between the rhythms drawn by the metallic drum machine, the intricated basslines and the cinematic and ethereal atmosphere are well intertwined, creating a vortex into which the listener is pushed.

It’s both difficult and unuseful trying to describe each sequence and each detail contained in a so multifaceted album, something the listener can do by himself, discovering something new and unheard at each spin.

Fast songs having odd tempos, such as Fwl_it_FST_1 and the aforementioned Astra2KIX160, are alternated by slower ones, such for example -Ve+Ve and Electrodd, having a more 4 / 4 driven rhythm, which evoke in the listener imaginary synthetic scenarios.

The ending song, the aforementioned Love like a quad env is a slow episode focused on dissonances and distortions, opening in the end to a melody sounding as if it was played by an organ, a glimmer of light at the end of a dark tunnel.

It’s difficult not to feel engaged when listening to a record stimulating and rich of details like The Decision Tree, a pretty convincing IDM album. Give it a try.