Published by Alessandro Violante on February 15, 2021 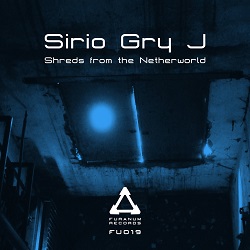 A not biased critic of the evolution of music will recognize that, during the last years, in the deepest area of the Netherworld of the so called “grey area” of electronic music, plenty of new notable projects were founded. These projects, through time, have become relevant shreds of the so called current “industrial music scene” (although it’s up to the reader thinking if this definition does actually still make sense).

Among these shreds, we find Furanum Records, founded by Dominik Müller, Monolith Records founded by Sirio Gry J, and Liber Null Berlin. Sirio Gry J’s music is what links these projects, as he’s the founder of Monolith Records, he’s a resident dj of Liber Null Berlin and his new album, entitled Shreds from the Netherworld, will be released by Furanum Records on tape format on 12th February. As already done some months ago with the release of the album Maschinenherz by Coan, with Shreds from the Netherworld, Furanum Records releases another full lenght tape release, while in the past it focused on releasing vinyls. This choice suits very well with the work done by Sirio Gry J.

Given these premises, quoting the promotional notes available on the Bandcamp page of the release, this album contains a set of shreds belonging to the own visionary Netherworld of the artist. Therefore, Shreds from the Netherworld can be considered as a partially autobiographical concept album divided into two parts, each being a side of the tape. In the A side, the artist observes this visionary Netherworld with detachment, while in the B side immerses himself in a visceral way. Each shred of the album explores this unknown place through a wide range of music styles, ranging from techno to rhythmic noise, from noise to dark ambient. That’s one of the strenghts of a release that, although featuring fifteen songs and three remixes, never bores the listener, thanks to the alternation of songs exploring different sounds and styles, together portraying the multifaceted artistic vision of the artist.

Regardless of the stylistic differences of each song, the sound of Shreds from the Netherworld can be described as dense, deep, visceral, radical, industrial. Also thanks to the mastering done by Dominik Müller, starting from the opener Psychophonia, the density and depth of sound are blatant. Sounds are strongly impressed on the listener, hard-hitting the listeners with its dissonances. Psychophonia well portrays the detached observation of the artist towards the Netherland. Psychophony is the paranormal phenomenon of hearing unhuman voices generated by recordings, receptions and amplifications made by means of electronic gear. If we think about this phenomenon applied to this song, the listener could hear these voices while listening to it.

The same trademarks are emphasized in the B side, starting from Dawn of dissent, one of the most beautiful songs of the album, with its industrial sounds and particularly sharp and biting noise injections, engraving in the head of the listener. With their incessant beats, Hegemony and Mindwash are the rhythmic noise soul of the album. The other songs of the B side highlight the dark ambient and experimental side of Sirio Gry J’s music, with its melanchonic sounds and with his work on the noise matter. The noise component is particularly emphasized on Rage repression, a song we could define as power electronics. Testament closes the album with its melanchonic sounds highlighting the melodic side of the artist, the same side already listened to in Down the abyss, which closes the A side.

The three remixes by Uncto (the project of Dominik Müller and of Rafał Fürst), by the Latvian artist SKD and by Tomohiko Sagae, complete the album offering personal interpretations of the original songs, being respectively Down the abyss, The deaf souls and Void. In the remix of Down the abyss, Uncto build an intense experience thanks to a slow and powerful rhythm; the Latvian artist SKD, one of the engines of the label STURM, offers his view on The deaf souls with a martial and industrial obsessive rhythm; Tomohiko Sagae, injects heavy noise layers in his remix of Void, offering his rhythmic noise-like version partially inspired by the music of Sonar.

From this analysis, the complexity and the variety of Shreds from the Netherworld, in which the artistic vision of Sirio Gry J is expressed at its best, as well as the experience evoked by listening to it, clearly emerge.