Published by Alessandro Violante on January 30, 2021 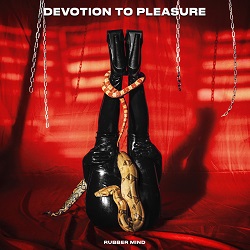 Among the large amount of labels born in the last years releasing EBM, industrial techno and techno EBM music, Rubber Mind Recordings, founded by the Colombian musicians Common Poetry (Lina Amaya and Sebastian Montenegro) has sparked a quite strong interest into the followers of this kinds of music. The label was founded in 2020 and, since then, released two compilations. The first release, entitled Ecstasy & Transmutations, was released on last May, while their new release, entitled Devotion to pleasure, was released in digital format on 2nd December and will be released on vinyl on 22nd February.

The strenghts of Rubber Mind Recordings are, on the one hand, its concept which, through the expressive force sparked by the visual BDSM imaginary, offers its interpretation of the concept of body music and, on the other hand, the use of the vinyl format which, in the last years, experienced a huge revival. Common Poetry’s debut, entitled Violencia Poética / العنف الشعري, a split with Arabian Violence, was released on 2019 by the Italian label Infidel Bodies. During the last three years, with Rubber Mind, free spaces and events were created in Bogotà, where artists such as Damien Dubrovnik, Croatian Amor and Vanity Productions, Unhuman, An-i, December and Puce Mary among others played. Such events have always included performance art and the spaces always created a very deep atmosphere and close relation between artists, ravers, weirds, the trans community and people, creating a small but very united community.

Another distinctive element of Rubber Mind Recordings is that of performance, enriching their concept and their performances, in which the sonic and the visual elements generate an all-embracing experience. In a context in which several new projects are founded everyday, having a strong visual identity can help to emerge in this music market. The use of words such as ecstasy, transmutation, devotion and pleasure, are useful in emphasizing Common Poetry’s concept and in evoking these feelings in their listeners as well as in highlighting the ecstatic dimension of the body and of the act of dancing, while the concept of transmutation is linked to body movements and to performance art.

Devotion to pleasure offers six songs composed by some of the most interesting artists who play an important role in the current scenario: Years Of Denial, Tomohiko Sagae, QUAL, Filmmaker, Common Poetry themselves and Nghtly, each having their style. There’s the minimalist approach of Years Of Denial here showing their most melodic side, the rhythmic noise-influenced sound of Tomohiko Sagae, the EBM-influenced sound of QUAL, the rhythms of Common Poetry, and the EBM of Nghtly and of Filmmaker. Regardless of the music souls of each artist, all the songs are linked by the concept of the release. Song titles such as Lover’s crime, Sepctic kiss, Asphyxia and Melting plastic on frail skin recall the BDSM imaginary. The tracklist has been well thought, and all the songs, regardless their differences, sound well together. Devotion to pleasure has what it takes to be a successful release and Rubber Mind Recordings has what it takes to release other good music in the future.