Published by Davide Pappalardo on January 22, 2021 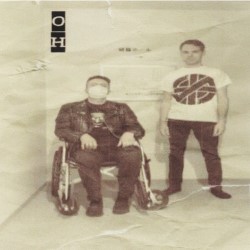 Ontario Hospital, shortened as O/H, is the ongoing collaborative effort between David Foster (Huren, Teste) and Rich Oddie (Orphx, Oureboros). They debuted with their first EP Future Ready on Opal Tapes in 2015, and after three years they returned with the sophomore work Market Values on L.I.E.S. Their sound is a modern take on experimental music with rhythmic elements and sharp noise innuendos, exploring the possibilities of obsessive post-industrial music and techno scenarios.

This kind of music finds its best expression in a live setting, reaching almost ritualistic dimensions and depths enriched by psychedelic atmospheres. The cassette No Contact (Live Archives 2011-2019), published on new label Ekstasis in 99 limited copies, works as a testament to that; here we find 11 recordings from performances in Japan, Russia, Holland, and Canada. The tracks don’t follow a chronological order, so they are not intended to represent an actual live show. Instead the new order gives us a different view of their art, conjuring a mantra and a “ceremony in a factory”.

Power starved / human waste starts our experience with droning distortions and modified vocal samples, a coarse and hypnotizing movement ready to degenerate into looping obsession and angry, dictatorial shouts. Then, pounding and slow rhythmic elements find their place in a crawling structure where the aggression is encapsulated in the inhuman vocals.

Safety net is an example of flawless fusion of power electronics and rhythmic noise, starting with a sampled speech and progressively degenerating with noisy disturbances. The first part remember us of early industrial music with his taste for chaos, slowly the track adds more rhythmic elements in a tribal drummig underlined by claps. During the second half things get more energy in a mechanical ballet for wasted lands.

Delirium tremens is one of the more rhythmic-oriented moments on the cassette, a savage track ready to explode with its militant march and shouted vocals. Another example of obsessive and droning elements employed to capture the listener in a sonic world of its own. Generic expectations surprises us with a techno-industrial moment not very far from Orphx recent endeavors, a galloping track with sci-fi synth sounds and shrilling elements. Be ready for the galvanizing last moments, the climax of a constant crescendo.

The work presents a second half where rhythms and modern sounds are more prominent, albeit the noise-tinged elements are not forfeit, Perfect examples are given in Power spectrum and its frantic mixture of pulsating energy and distorted vocals, or in All flesh / funerals daily with the unforgiving bass sound which works as an earthquake and the smashing kicks.

If you want to know what O/H are about, this the perfect place to start. The two souls of the project, the more abrasive and old-school noise/industrial one and the more rhythmic/techno influenced one, are perfectly showcased in the two halves of the album and sometime they interlope each other in a coherent and seamlessly way. Have a treat with their engaging mantras for a decadent age.