Is witch house dead? The answer is ‘yes’ if we limit the phenomenon as a hipsteria, that period during which the scene briefly appeared as a shadowy ghost on the overground. If talking of a scene is appropriate.

Witch house is extremely lively, productive, stakanovist in the most fit place for it – the underground.

Approaching an interested, curious and aware listener of unconventional music, mentioning the phenomenon, the link and the association with Mater Suspiria Vision would take a split second. Almost a synonym.

Active since 2010, the project is musically very fecund and, thanks to Cosmotropia de Xam, filmically prolific, as well, through the alembics and retorts filled bottega Phantasma Disques.

They accepted to be interviewed. In the dark. Into an alchemist’s cave.

The first thought coming up to my mind is that MSV is a Renaissance hypercreative and hyperproductive obscure animal. Cinema, music, graphic design, magick all seeming to come out from a XVI century Florence ‘bottega’ encapsulated in the 2010s. Do you feel confortable with such a descriptive petit tableau?

Seduction of the Armageddon Witches

The 2010s will be considered in years as “Age of Influence”, coined by the magick of the internet and their social webs. So there is quite a parallel. (Ted Rubin, newyorker Social Marketing Strategist, Keynote Speaker and Brand Evangelist spoke about the subject. ed.)

What was there before the dark? Before MSV and Witch House? Have you always been part of the electronic scene and the artistic, cinéphile demi monde?

Before the dark there was light of birth. Rebirth and cables that connect the light of the fire with the doom of earth. Earth split into two parts media and people. Media reigns.

Zulawski and Lynch, Argento, Bava and Cronenberg, Jesus Franco and Gaspar Noe (namely the Enter the Void‘s Noe). How much do these artists influence your creative sparks, or your everyday life? I use to say that a film is never only a film (i.e. I couldn’t drive after I watched Crash).

If you create movies, your everyday life is a movie too. You see everything through glasses. Cinematographic ones. Of course these are influenced by a catalog of idols.

We touched upon the music and cinema subjects. What about the painters, designers, sculptors that are capable to go straight to the deepest?

Shivabel and Theo: how come you ended up joining Cosmotropia and Aura? Were you intimidated by the mystery and obscurity surrounding MSV?

Shivabel: we actually never had the pleasure of meeting Aura, the works Cosmotropia de Xam has done with her have nothing to do with ours, the only thing in common is that we worked with the same director. 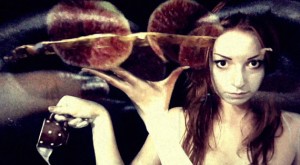 Theo: We could say we are the italian “headquarters” and production team of Cosmotropia de Xam. In all his movies that have been done in Italy – where he always comes with pleasure given the significant influence on his work – we fully cooperated with him, from pre-production to post-production. But he always comes alone… So unfortunately we do not know his foreign collaborators.

Shivabel: Regarding the MSV project, neither I nor Theo have been intimidated by that halo of mystery and “darkness”, as everything started from there indeed, from the cooperation with MSV. Cosmotropia de Xam came after that.

Shivabel: are you the most esoteric – magick prone element of the project or the interest/practice is shared? Does this come as a legacy from the industrial culture you’re into? PTV, Throbbing Gristle, Coil, just to name a few.

Shivabel: No, I do not believe to be the most prone to magic and esotericism. We all are in our own way, and for me in particular it has always been like this. I have always cultivated such interests even before having any link with the industrial scene.

MSV are all gathered in the sitting room with good wine galore or whatever else might be; what books are lying on everyone’s lap? 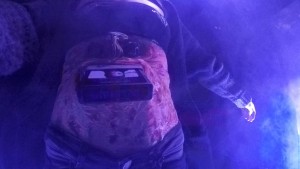 Is irony important in your work? It’s impalpable and subtle. Or the culprit is the interviewer itself that has a chronic tendency to always see an ironic side of things?

Do you feel part or, on the contrary, extremely detached from what can be defined as a regular contemporaneity? Participation or adaptation?