Published by Countermeasures Electronics on November 2, 2021 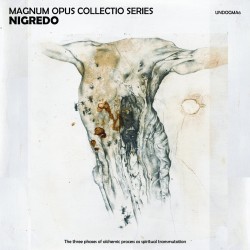 Undogmatisch was born in Berlin in 2012 as an experimental A/V event platform, a project that later in 2016 developed into a label. Mirco Magnani, manager of the label together with Valentina Bardazzi (who gives the graphical ‘face’ to the project with her paintings), and also a founder of the project, started to produce music since the 80’s with the New-Wave band Minox; it was the beginning of a journey that found its development over more than 3 decades (almost 4), which spawned different aliases that led Mirco to approach the first label project in 96 (Suite Inc.) and to perform along some heavyweight figures like Blaine L. Reiniger of Tuxedomoon, Steven Brown, Lydia Lunch, Krisma, Mad Professor… It is through such extensive experience, matured across different levels and eras, that Undogmatisch is able to deliver a more than relevant experimentalism, proposing solid releases existing not just for the pleasure of the virtuosity itself, being able to provide a meaningful sonic asset to the concepts proposed upon which the work takes shape.

Nigredo is the first of the three phases of the alchemic process adopted by the Hermetic tradition to describe personal and spiritual transmutation, as well as a medium in art and literature. Carl Gustav Jung pointed out these 3 phases as a model to enable the individual to get a deeper understanding of the self, through a psychic process called ‘individuation’; a way to render the whole complexity of ‘being’ at once, blending the fragmentation that normally characterises it.

For Nigredo, first of the three chapters of the Magnum Opus Collectio Series, the mission flows naturally despite being different artists from different contexts shaping up the journey; each musician showcases his very personal sort of ‘post’ vision coming from different perspectives, which results in an organic listening that never gets trivial, able to slowly develop its subtle crescendo oscillating from floating dreamlike drones to dark synthetic spaces. If this is the right sonic equivalent to Nigredo, the painting by Valentina Bardazzi (also available as a poster printed on a thick embossed textured cardstock super A3) renders justice for the eye, embracing the abstractness of the work, and depicting it through a painting that similarly oscillates between a ‘post-splendour’, and decline.

Wrapping up the 11 tunes, is the brilliant mastering work of Ken Karter that the selection providing a disarming coherence, a quality of detail and depth that instantly locates the release within the high-quality sector of the market.