Published by Davide Pappalardo on May 9, 2019 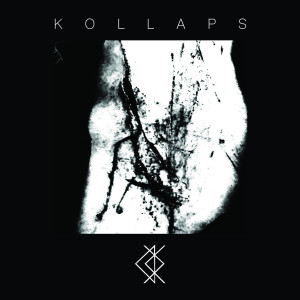 Australian trio Kollaps return with a sophomore album called Mechanical Christ and released on the English label Cold Spring. Wade Black, Robin W. Marsh, Damian Coward continue what they have started with their first full-length Sibling Lovers in 2017, perfecting their formula which mixes post-punk, noise and industrial – with a style influenced by early Einsturzene Neubauten and the more caustic side of guitar-driven music.

A continuation, but not a repetition: the band has evolved, and now they sound even more ferocious and focused, with enchanting rhythms and suspended moments ready to explode in dark onslaughts. Themes of of exploitation, vengeance, drug addiction, paranoia and slave labor give us a not so pretty picture of our society, a world with a twisted morality where we can only scream with a too often repressed rage coming from inside.

Ankara starts our grim journey with dark undertones, heavily filtered vocals, disquieting samples and pulsating movements; the intro grows with scraped-metal sounds, preparing us for the militant rhythm of Christ and its pounding nature, enriched by distorted vocals coming from an inner hell and subtle melodies with a brooding appeal. The track slowly proceeds, conjuring a mechanized mantra celebrating a sarcastic passion for a post-modern Christ dying for a world which no longer cares about anything, before exploding into a destructive and cathartic ritual.

Fleshflower is a rhythmic ride recalling the harsher side of Foetus while adding power and violence: distorted guitar loops, industrial drums and furious vocals wont let us out of this frantic nightmare. A punk tinged affair with a nervous nature, a wall of black noise and unashamed aggression. Blood premonitions returns to slower rhythms, but not to less dark atmospheres. A cinematic structure offers obsessive rhythmic pattern and a grim bass, crafting a perfect scenario for the malevolent vocal delivery. The crawling number is a masterful game of suspended tension, which collapses during its second half into industrial noises and shrilling guitars.

Traducer is a throbbing voyage with reverberated vocals and droning lines underlined by sudden burst of noise, guided by serpentine vocals. The cut follows its electric course, reaching a corrosive digression instead of any easy climax, giving us no hope. The title track is a march with strong drums and crooning vocals, slowly developing a movement enriched by menacing bass sounds. Dark ambiances and inquisitive atmospheres dominate the episode, never giving up the controlled tension which characterizes our experience. Love is a war ends the album with acoustic elements and neo-folk vibes, surprising us with its sombre yet grim songwriting. The flow is interrupted by noisy effects, underlying a subtle menace which takes control of the track during its second half, offering thunderous rhythms and shouted refrains.

A work with a bleak soundscape and a nihilistic soul, perfectly inherent to the music of the band. A modern take on contemporary noise and industrial music, with more than a hint from the tradition of the genre, but at the same time a highly personal vision with a heartfelt performance with a theatrical quality. Bass sounds, guitars, noise, industrial elements, and ferocious vocals concur to a dark hymn for dark times and post-modern decadency. A commentary on our daily reality, especially what we don’t like and don’t want to see – what industrial music should always be.