Published by Alessandro Violante on March 18, 2022 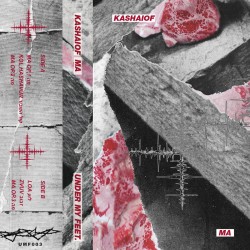 With each release, Under My Feet. is showing its nature of a project opened to a wide spectrum of different styles, while having a common graphic imaginary shared by all its works, an important element contributing in building their identity. Thanks to these trademarks, the project is finding its place in the unending underground music scenario rich of interesting releases and enduring projects, in which it’s not easy to emerge. Their third release, entitled MA, by the Israeli duo Kashaiof, is another example of this uncommon formula. MA will be released on tape on 17th March.

For this release, Under My Feet. has chosen one of the projects who’s previously released their music with the very prolific Los Angeles-based label Chondritic Sound, which is another example of an actor of our scene moving in several directions, while maintaining a clear identity. The American label has released music by artists such as Smell & Quim, JT Whitfield, Pure Ground, Oil Thief and many others. Considering the open-minded trademark of both Under My Feet. and Chondritic Sound, this interest towards the American label shouldn’t sound strange.

Kashaiof, a duo formed by Eyal Bitton and Itzik Avizohar, were already active within the context of the Studio Straus, and here in MA show six views on their wide and complex music spectrum, characterized by a strong experimental and “live” nature. The word MA has two meanings: in Hebrew, it means “What”, while in Japanese means “negative space”, “gap” or “pause”.

The solemnity of the atmosphere and the taste for sonic solutions borrowed by Contemporary Music and, before that, by Experimental Music of the first half of XX° Century, meet wild noise injections in songs such as MA Op. 1, Hakol Hashavur and Loa, but the most articulated and multifaceted song is ZVUV (זבוב), a long mantra in which several elements evoking the live performance dimension can be found. Manipulated voices, drums, noisy drones and much more bring the listener towards mystical experiences.

Kashaiof offer to the listeners a complex and multifaceted personal music formula, and Under My Feet. once again demonstrates its multidisciplinary vision that deserves a particular attention towards their work.