Published by Alessandro Violante on May 28, 2021 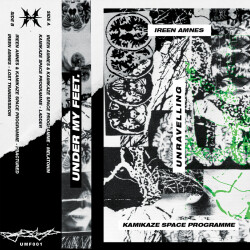 The English collective Under My Feet., formed by Ireen Amnes, Carolaina Losa, Hila Angelica and Jacopo Dema, is one of the several underground projects animating the English (and not only) scenario. Since 2015, Under My Feet. has organized several events with artists such as Drew McDowall, Operant, Vera Spektor, Years Of Denial, Antechamber, Puce Mary and many others. After having organized these events for some years and after having brought their music in several places, Under My Feet. has also become a label. The events organized by Under My Feet. put together music, art and A/V.

Its new release, Unravelling, which will be released on tape and digital on 28th May, features four songs by the co-founder of the collective Ireen Amnes and by Kamikaze Space Programme. Two of these songs were made together by the artists, while one was made by the only Ireen Amnes and one by the only Kamikaze Space Programme. Ireen Amnes has already released a release in 2019, entitled Faus Nova, with the Berlin-based label Instruments Of Discipline, while the following year has released an LP with Sonic Groove, entitled In The Land Of Silence. Both these releases received good feedbacks. Before these releases, she released music with the labels Tales Collective and with Kombinat. The English musician Kamikaze Space Programme, active in Berlin, has made several releases with a wide range of labels, such as Ohm Resistance.

In Unravelling, these two eclectic musicians have made an effective collaboration, showing the darkest and the most underground side of IDM with an English touch, portraying very well the most obscure corners, the gloomiest places, the unhealthiest landscapes, and the most disturbing atmospheres of the English capital. The syncopated rhythms, the elements of improvisation (listen to the emblematic Fractured) and the visionary synth sounds are only the main ingredients of a bitter yet tasty recipe, a perfect portray of the metropolitan discomfort and of the posthuman alienation in which its citizens live their lives. The estrangement provoked by the breakbeat of Melatonin, the liquid sounds of Ladder and the melanchonic synth sounds of the last song Lost transmission highlight a lucid music vision and a variety of sounds that will satisfy the listener.

The song titles are wisely chosen keywords and concepts, open windows on the Postmodern world: Lost transmission makes us think about the loss of communication and the impossibility to communicate, which are trademarks of our epoch, while Fractured evokes the social and psychological breakup typical of the Postmodern age and of the so called age of information. Melatonin portrays the loss of the boundaries between night and day, dark and light, reality and virtuality, being one of the consequences of the information overload we are subjected to everyday. Ladder evokes the sprain between the public and the private. These concepts can be found in Unravelling, a word evoking the unveiling of the world we live in as well as a further step in the process of maturation of this collective. A window on our condition.