Interview with Velvet May

Published by Alessandro Violante on February 11, 2020

Velvet May, project run by Andrea Davide, has just released his third release with his label Tears On Waves, the third release in less than one year, but he’s already played his mixture of techno and EBM in Berlin – the city where he lives -, in London and in Vilnius. Phoebe’s white skin, released on 20th January, is his best and most mature release so far. We talk with him about it.

Hi Andrea, let’s start this interview talking about your project Velvet May. I think it could be interesting for our readers to know how it started and what you want to express with your music.

You’ve started your label Tears On Waves, and all your works have been released by this label. How and when you’ve decided to start it? Does in Germany exist something similar to SIAE in Italy? Do you think you’ll also publish music composed by other musicians?

The label started in early 2019, just when I realized I wanted to release the music that I like when I want when I want and become musically independent.

In Germany there is GEMA, a collective music management body that protects the copyrights and musical works of its members. If you want to be protected and paid when your music is played, you’d better register. But this is not something that most musicians and label owners in the underground scene pay much attention to. It’s up to you to decide whether you want to join it or not, you don’t have to.

With my label I’ll also publish works by other artists, already from the next release, you’ll listen to the work of a very interesting artist who’s doing so much good to the scene with his music, and of course you already know him.

You’re a very prolific musician, you’ve made three releases in less than one year. How much time do you spend in the studio?

I spend almost every day making music, obviously not whole days, and this always happens when I feel like it and when I have something inside that I want to kick out. Never force yourself and never run. The quality of time spent in the studio is the most important thing.

Let’s talk more in depth about Phoebe’s white skin, which sounds to me like your most mature release. According to me, you have improved your songwriting skills, and, with each release, you’re working on a more personal sound in a scenario in which this isn’t always so simple.

Everything that an artist releases is the product of all the influences he receives from the outside and from what has characterized his past. Everybody makes music that he feels more his own, identifying himself in a musical and cultural movement that more carries on the values that reflect him.

I’ve noticed that, with what we could call a “rediscovery”, a revival of the underground roots of techno music by young musicians and djs, Italy, and I would say especially Naples, started to have an important role in this process, thanks to artists such as you and SHARPLINES, as well as labels such as She Lost Kontrol and Infidel Bodies among several others. It seems to me we’re experiencing a sort of new underground Golden Age. What do you think about it? How have you become interested in this music?

For sure there has been a great return to the textures of the late 70s and 80s, and I can say that also other sectors have been touched, such as photography, fashion, art in general. When I was a child I was interested in electronic and rock music. I got in touch with Post-Punk music about 4-5 years ago. She Lost Kontrol has played a big part in my journey and I am proud and happy to be part of its collective. By the way, I always try to combine the influences I receive from outside with my own experiences. 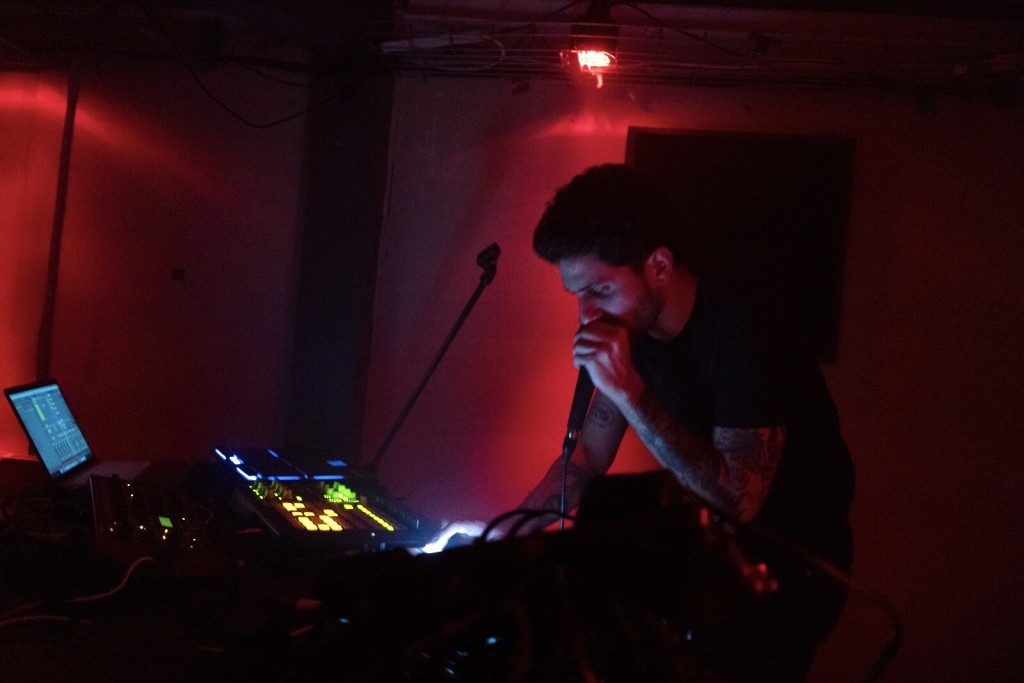 How much has Berlin influenced you and your music? If I’m not wrong you had this studio in Warschauer Strasse, which seems to me an inspiring place for artists. How much is important to live in Berlin today?

As I said before, Berlin definitely plays its part and the Post-Punk scene has a solid base in this city. There are a lot of events, musical and not, that carry on this movement. All the labels located in this city like She Lost Kontrol, Aufnahme + Wiedergabe, BITE, Sonic Groove etc do a great job. I currently live in Neukolln and have the studio at home. I used to live in Warschauer and I had the studio in Warschauer but this didn’t influence me and my music.

Obviously you don’t have to live in Berlin to have the right inspiration in the musical path, I’m just saying that every city does its part, with its influences, places and people living there.

You’ve recently played in London and in Vilnius. As an artist, which differences have you found while playing in such different places?

I had the pleasure to play in those places with really cool and respectable organizations, both of them did a great job, in fact I’m really satisfied of those parties.

In London the venue was quite small but perfect for a live set of a certain kind, a bit more experimental, where the ear focuses a bit deeper on the sound, different from the one done in Vilnius, where the venue was a big club, the Kablys, very big, where I did a live where I pushed a bit more on the groove and made the situation more danceable.

It seems to me your new songs could be very appreciated in the grey area alternative dancefloors. When you make music, do you sometimes think about this aspect of music? Do you like when people dance to it?

Before starting a track, I decide what character to give it, so whether it should be usable in a club or more for a deeper listening, working the groove in different ways depending on the character I would like to give it. I always try to work the sounds I usually use differently depending on the mood of the track. I’m also recently working on something more cinematic, so I’ll confirm that I like to touch different aspects of my music.

What are the lyrics of your songs about?

The lyrics of my songs touch on themes such as eroticism, pleasure, personal suffering, fetishism, revolution and rituals.

I was in London when you played with Twins, Faux Naif and The Brvtalist, but maybe not
everyone was there. How your live performances are? Do you prefer to play a tracklist or
do you build a different kind of experience, different from that built with your releases?

My performances have an organized structure since before I started show. To this structure I like to improvise different elements and to add my vocals. My live sets are a mix of tracks I released, unreleased tracks and improvised tracks. All this is set in sequence and is built up before, but also the improvisation aspect inside is important. It all depends on the mood in which me and party are.

Thanks for the time you’ve dedicated us. If you want, greet our readers and invite them to buy your new release!

Thanks a lot for the interview and all the best to everyone, hopefully you’ll enjoy the release! Cheers.