Published by Alessandro Violante on May 4, 2019

Diasiva is a collaboration between Swarm Intelligence (Simon Hayes) and Monolog (Mads Lindgren), two artists already known for some interesting releases by labels such as Instruments Of Discipline, Ad Noiseam, Hymen Records, Subtrakt and Voitax. They have released, under the Diasiva moniker, an album with Ohm Resistance entitled Doublefade, an EP with Acroplane Recordings, and now an EP entitled Thirst with Instruments Of Discipline. Diasiva’s music is a perfect fusion of two quite different approaches, music in constant evolution. Swarm Intelligence and Monolog are thirsty for expressing themselves through their music. That’s why we have interviewed them.

Hi! Tell us something we don’t know about Diasiva! We know you’ve met during Burn The Machine Festival in Berlin in 2011. What happened after that?

Simon: Fuck, that’s going back a while! Well, a lot has happened in the 8 years we’ve been making music together. Thinking about it, 8 years is a long time, probaby one of the longest running relationships, let alone music collaboration either of us have had.

The Burn the Machine set was magic… The whole festival was magic really, but we both acknowledged that there was something there in the collision of our two sonic worlds – compelling enough that it would have been a shame to let it die. So we knew we had to turn this into a studio project… and so Diasiva was born.

Mads: I know a funny story about Diasiva! So basically we have our session days every Wednesday and we have a particular Turkish restaurant where we had the same dish, every week for 8 years that contains raw onions and lots of garlic. So what you didn’t know about Diasiva is that every Wednesday night, we sleep on the couches to prevent our wives suffocating from noxious gas.

Simon: Well you do anyway! To be honest, our Wednesday night studio sessions are basically an excuse for us to drink beers and talk nonsense

Mads: or a lot of sense actually

Simon: True ha! It’s been nice to see a friendship form out of a shared taste for distortion and bass. That’s actually where the name comes from… I showed Mads the Irish word for distortion and got him to try to say it, then wrote it down… It said “Diasiva”

I liked a lot your new EP! It seems to me your sound has quite changed since the release of your debut album with Ohm Resistance. Do you agree with my feeling?

Mads: Feelings are for carbon-based lifeforms…

The delta between what we have been making as individuals has widenened considerably.

Simon: True, we were both making pretty heavy, high tempo stuff back then!

Mads: Yeah, you got old. Anyway, basically, spanning more styles and genres as individuals also matured the collab. And after seven years of eating onions, obviously you get better at what you do.

In addition to that, trials of life also shaved the bullshit off our personalities which reflects in the music.

Simon: Yeah, we’ve both been through it and seen each other go through it… Life definitely shaped the Diasiva sound into what it is. Also, the direction we have taken the sound is very much a mutual and natural one. Our sound will always evolve, because we are more interested in pushing the boundaries of what we can achieve, rather than settling into a comfortable formulaic approach.

Mads: Yeah, the purpose of the project has been sonic exploration, nothing else.

What can you tell us about Thirst? What’s the idea behind the cover artwork, and what connection does it have with your music?

Simon: The cover art is actually from a photo of an world war two memorial, a scuplted thick plate of iron that had been worn down by the wind and rain. The scuplture was of soldiers, but due to the erosion, it seemed as though they were all dissolving. This is one of the figures, cut out and processed… Treated in the same was as we would treat a field recording.

Mads: Yeah, we perish in the process of doing what we do, which is just time running its course.

Simon: Degradation of audio is a big part of our sound design process. 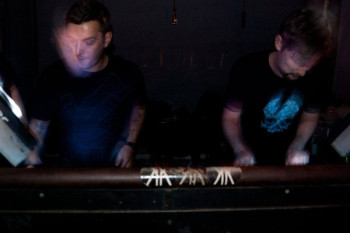 I think in Thirst you express the will to be not easily categorized in a particular music style. There’s a wide range of styles and influences, the result of a process of maturation you’re showing. Do you agree with me?

Mads: The whole idea of making music is making stuff that is unheard and undiscovered… So we take that as a compliment!

Simon: Yeah, there is something very liberating about our collab. We never really cared about genre boundaries, or selling records, or being popular. This was all about experiencing sound in the moment.

Mads: And delivering new experiences to audiences. However, I don’t think that mature will ever be something that I connect to our collab! We willfully and consciously abandon adulthood and engage in childlike play with high tech as a fundamental thing in what we do.

Simon: Playing live shows is always fun. We’re always the odd ones out. We’ve gotten bookings for industrial, techno and drum and bass shows and we never really quite fit. It’s always great fun to unleash the full Diasiva sound on an unsuspecting audience. It’s always gone down pretty well though. The last one I can remember was in About Blank, smack in the middle of a techno night. There were some confused faces and an empty floor in the beginning, but the place was heaving by the end of our set. Higher tempos equal higher energy levels.

You’ve released music under several formats: digital files, cd, vinyl. What do you think about this renovated interest in vinyls we’re experiencing nowadays?

Mads: I am old enough to see it come and go two times over. It was never about the carrier. It’s always about the content. Good music finds people no matter the format.

Simon: I totally agree. Format is really not so imporant. That said, I do have quite a fondness for vinyl. I DJ quite a bit, as well as playing live, so I love the opportunity to play with such a physical medium. It actually makes me more nervous… Things can go wrong and slip out of time, it makes the whole thing more precarious.

Mads: Yeah, you interact with the music in a different way.

Simon: You used to play records back in the day too right?

Mads: Yeah I got scars! Unfortunately, most people percieve physical releases as a way of making the release real. Which is really a shame, since there is so much digital-only that is absolutely fucking amazing. That said, I can’t deny a sense of pride and fullfillment finally seeing Diasiva on black, shiny vinyl.

Simon: Yeah, massive thanks to Luna and August for putting this out on Instruments of Discipline. We’re both so happy to be on such a great and fearless label. Plus, dolphins.

Simon: I haven’t owned a cassette player since I was a young teen.

Mads: I have a tape deck in my car. I love tapes, all the malformities that comes with the media… The hiss, creating an absolute headspace in the sound, the bass being so lush and exhaggerated….

Simon: I would definitely be into using tapes to process sound. I just don’t really go for it as a listening format so much.

Mads: I wonder how much vinyl or tape actually leave its packaging.

You’re two quite different musicians. That’s what I think when I listen to your releases, however, you’ve come to a common point. How do you write a song? Do you write it together?

Simon: A lot of cursing and shoving as we fight over the mouse!

Mads: We get very easily excited and eager, so most of the stuff actually writes itself in the name of enthusiasm.

Simon: These days we barely need to talk in the studio. There seems to be a shared understanding for where we want to take a sound, or composition. We reserve words for insults.

Simon: Onions are carbon-based lifeforms too though.

Mads: You talk to onions much Simon?

I think the EP format suits very well your music. Do you think you’ll ever going to release a new full length, or you’re not interested anymore in this kind of format?

Mads: We produce enough music that is also on an array of coherence, so we can definitely pick this up again. Was a long and hard process, spanned many years, many onions, much abuse, but I’d see it through, any day.

Simon: Likewise. The tracks are there, and we’d definitely not shy away from another album. In a way, it’s the best medium for us to tell the Diasiva story.

Thanks for your time! If you want, greet our readers and invite them to buy your new EP!

Simon: Thanks for listening to our drivel and bad humour. Please go check our EP on Instruments of Discipline, and be sure to check out the rest of the releases on the label too!

Mads: Sincerely, thanks to everyone that ever supported our project, gave us stages to play on, built software for us and first and foremost Instruments of Discipline, for making this eternal.