Published by Alessandro Violante on June 4, 2021 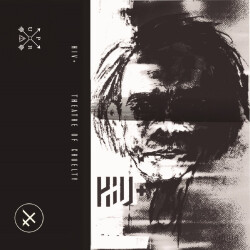 Industrial Complexx has always proved to have a cross interest for music and uncommon art, and Theatre Of Tragedy, the new release by HIV+, is a good example of this interest. For more than 20 years, Pedro Peñas Robles has been active in the scene with its releases and with the work done with his label Unknown Pleasures Records.

Theatre Of Tragedy was released on 2nd April on CD by Unknown Pleasures Records and on tape by Industrial Complexx. This release focuses around the theories elaborated by Antonin Artaud, considered one of the most relevant characters belonging to the season of the so called historic avant-gardes of the first decades of twentieth century, which, thanks to their efforts and to their intuitions, aimed to break the rules of society, and which helped in shaping the definition of modern world by rejecting and refusing what the world looked like until that moment.

Antonin Artaud, who was a poet, a writer, an actor, and a playwright, for some years was part of the Surrealist avant-garde, active in the first decades of the twentieth century, together with other avant-gardes such as Dada, Futurism, Constructivism and Cubism. At the beginning of the twentieth century, a large part of these “movements”, regardless of their differences, their uniqueness, and of their ideas, shared their will to break the rules of the existing world, refused the past and aimed at creating a sort of “universal language” where all the artistic and cultural forms should have been merged together, creating something new, different from everything done in the past. This idea was sometimes identified with the German word “Gesamkunstwerk”, first used by the musician Richard Wagner.

As sometimes happened during those years, some artists were excluded by these “movements” for several reasons, such as when they did works that weren’t accepted by avant-gardes themselves. Antonin Artaud was excluded by André Breton, the founder of the Surrealist avant-garde, for political reasons.

Sometimes, the ideas brought by avant-garde movements produced results that influenced our world, while often they didn’t, but surely had a strong influence on the subsequent avant-gardes born during the sixties, such as FLUXUS and the American avant-gardes of those years. With his essays about how theater should have been like, Antonin Artaud had an important influence on the evolution of experimental theater.

The studies and the character of Artaud have inspired HIV+ in making an album having an experimental and avantgardist touch, evoking those times and that spirit of nonconformism which was typical of old avant-gardes. In Theatre Of Cruelty, HIV+ has collaborated with artists such as Barkosina YoD of Years Of Denial, with Phil Von (also known for his projects Meta Meat and Von Magnet), Marc Hurtado of Étant Donnés and the director Marc Caro. All the lyrics were belong to Antonin Artaud, while all the music has been made by Pedro Peñas Robles.

The eleven songs included in Theatre Of Cruelty evoke the language of experimental theater and its improvisation, the same that could have been found one century ago. This release is an original tribute to one of the most kaleidoscopic characters of the twentieth century, highlighting once again the direction taken by Industrial Complexx as well as the experimental nature of Unknown Pleasures Records.