Published by Davide Pappalardo on November 9, 2019 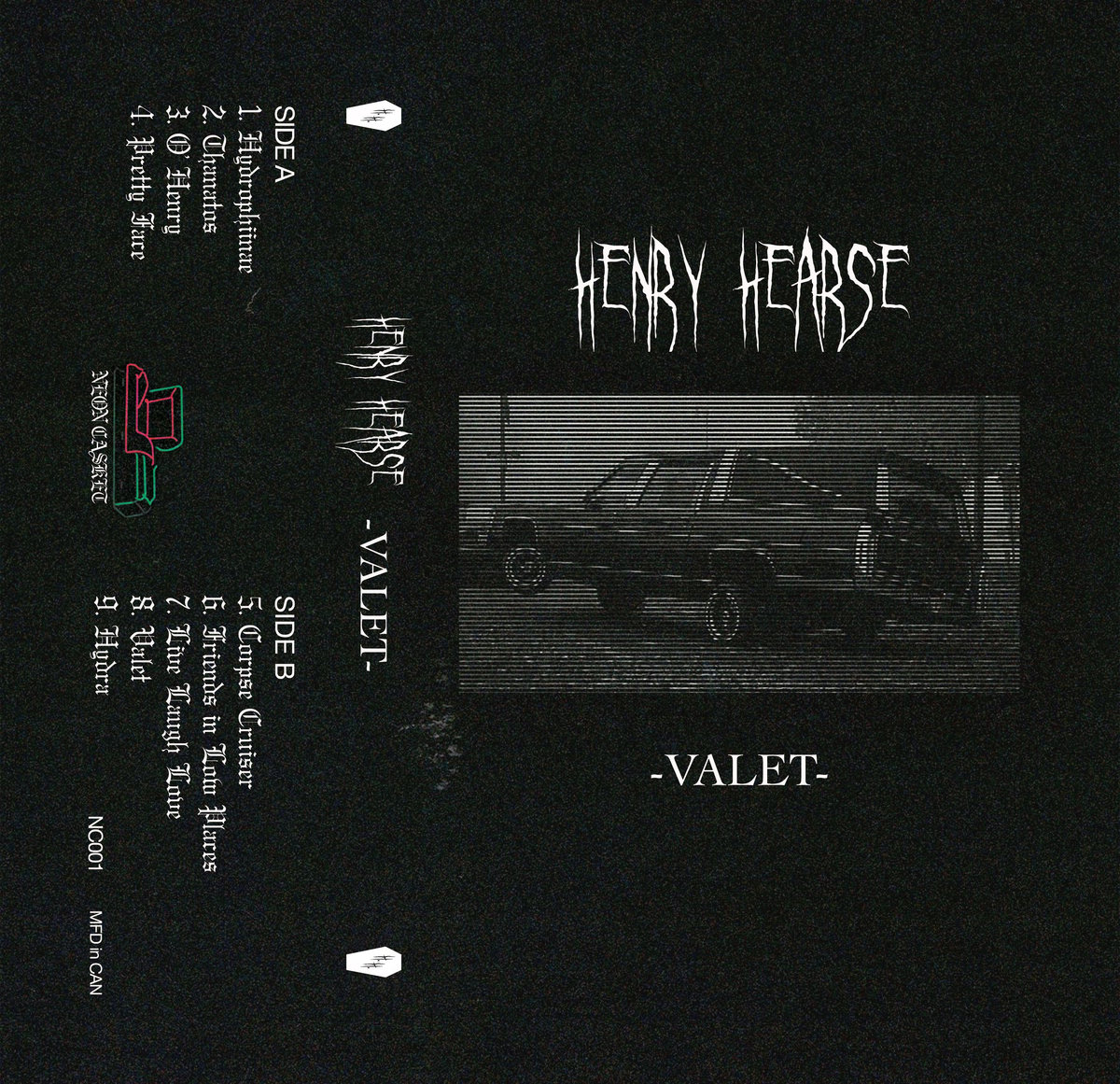 Henry Hearse is one of a kind. The New York project sees the man Henry Hearse himself, Moody Romeo, Lee Kevlar, Aleera Vampira playing and tweaking with almost forty years of underground dark music and electro-tinged sounds. Post-punk, deathrock, darkwave, synthpunk, EBM, nowave, techno have a meeting in a graveyard during an insane night with “recreational substances” and dangerous ventures in the downtown.

Creepy, sexy, old-school, modern, physical, ethereal, campy, grim: it does have it all. The vampiric theme is the starting point for a crazy voyage among metropolitan mutants, stylish undead, lysergic atmospheres. Humor, seriousness, abstract visions and earthly affairs have their course in a schizo-dimension where the “half man half car” protagonist lives (or better said unlives) its adventures.

Valet is the two-years-in the making debut cassette of our spooky friends, a 9-track (plus a bonus) album published on independent label Neon Casket. Forget everything about genres and boundaries: Henry goes wherever it wants and do whatever it wants. Downtuned guitars, obsessive synths, slow drumming, sax, faster attacks with full-front kick drums and snares, evocative pieces, dancing-in-the-dark tunes are on the menu.

Hydrophiinae starts with a throbbing bassline submerged in shrilling effects, then a minimal motif guides us among steady rhythms and snare drums. A pulsating movement slowly creeps in our minds conceiving an acid soundscape with alien ambiances.

Thanatos welcomes us with strong kicks and a growing arpeggios united with sparse beats and straight rhythmic patterns. A seductive structure is the main theme for an electro-tinged number in which whipping effects and riffing loops are added.

Pretty Face uses minimalsynth sounds with effected vocals and compulsive bass-sounds ala The Horrorist, giving us an infectious track with body-music urgency and percussive mantras. The mutant nature of Henry Harse starts to fully display itself preparing us for what is yet to come.

Corpse Cruiser changes scenario with its post-punk soul and sax sounds. It recalls the music of the past, names like The Birthday Party, Suicide, The Pop Group, and the nowave scene. Oniric synths can be perceived in the background, but the downtuned loops dominate the scene here together with the aforementioned jazzy sax.

Valet is an explosion of EBM galore and funky movements in a lo-fi setting, reached by nocturne guitars and sleazy robotic vocals and distant female choirs. Another crazy mutation from our demented vampire-hero, a challenging of conformism looking at the early days of the genre.

Hydra dwells in acid techno and throbbing synth sounds with hypnotizing and droning passages, a perfectly fitting ending for the album thanks to its lysergic atmospheres and modular effects. The long night of the Hearse ends in a dark dancefloor in which hard kick drums destroy our senses. We don’t want to spoil for you the bonus track, let’s say that you have to rehash your Batusi moves.

We are very lucky to experience this period of time in which underground artists feel free to explore, mix, mutate, elaborate past’s music in order to obtain something new. Henry Hearse is for sure one of them and Valet is a very well-thought debut and a surprise needing much praise and attention.

In a market full of same-sounding releases with rehashed ideas, sometime composed in the span of a day, this kind of products stand among the others thanks to their character. But it’s not only a question of being different – Henry Hearse’s music is good, very good. Buy the cassette or the digital version and support this great assemble so that we can hear more music from them in the future!