Published by Alessandro Violante on April 25, 2019 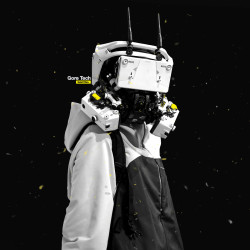 Cyberspace. A consensual hallucination experienced daily by billions of legitimate operators, in every nation, by children being taught mathematical concepts… A graphic representation of data abstracted from banks of every computer in the human system. Unthinkable complexity. Lines of light ranged in the nonspace of the mind, clusters and constellations of data. Like city lights, receding… (William Gibson, Neuromancer)

What was called science fiction when William Gibson’s Neuromancer was published in 1984, has now become our daily life. Internet, smartphones, Social Networks, Virtual Reality and, in wider terms, the so called “information society”, naively greeted as “positive” tools of the trade useful for a worldwide-scale. Wider and real-time access to enormous information sources, and so on, were used as tools to control people life, to substitute face-to-face communication with chat programs, as well as direct experiences with Virtual Reality and Instagram stories, totally sacrificing non verbal communication, an habit we’re progressively losing, considering it a waste of time.

Four years after the release of Gore Tech‘s debut full length entitled Futurphobia, released by the defunct German label Ad Noiseam, the English musician comes back with a sophomore full length entitled Geist Fibre, released by Ohm Resistance, a label founded by New York-based drum’n’bass musician Submerged, only on vinyl (300 copies) and digital files. His music sounds like an effective transposition in music of the aforementioned concepts, by means of its cold and frozen sounds. Music “portrays” a scenario in which our powerful digital tools, including the computer through which this article is being written, have progressively substituted human relations. People communicate with their devices, but that’s just an illusion of communication, because there’s no reply and we don’t receive any information back. The only way in which words are spread is the Internet.

Geist Fibre’s cover artwork shows a man-machine entity, something which can’t be identified as a human being nor a robot, a hybrid which only human element is the hoodie him/it is dressing, living an experience mediated by a sort of VR headset (something similar to an Oculus Rift), while being immersed in a sort of artificial world – a digital void made of bits, 0 and 1, inputs and outputs, imagined as an empty dark space in which no elements of the real world can be recognized. It’s a virtual world complementary to the real one. What in 2015 was perceived by Gore Tech as a phobia, has now become reality, the result of an ever-changing fast evolution of technology and of the strong impact this evolution has had on on our daily lives.

A change of social and cultural scenario, as well as a change of label and an artistic maturation, has had, as a result, a change in the sound of Gore Tech. In this sophomore full length, the musician courageously refuses  slavishly repeating what was done in the past, although it sounded very effective and powerful. This double LP, preceded by two EPs, respectively released by PRSPCT RVLT (Atlantic warfare with Enduser) and by his project EXE (Proximity shift, released on USB format), challenges the listener by putting his sound trademarks into songs having new structures, exploring different new territories. These twelve songs sound quite different from what done in the past, less shattering and explosive, yet engaging, enthralling, groovy and banging. If in Futurphobia the listener could find a certain breakcore influence, here that’s absent; Geist Fibre has a more minimalist sound, getting back the contact with drum’n’bass music, reshaped in several different ways.

That of Geist Fibre is a convincing re-elaborated, unordinary version of a sound that was already quite defined in his debut full length. Gore Tech demonstrates he is a musician in constant dialogue with different genres, never stucked into the same song structures and influences, as every musician should be. The Proximity shift EP, released one year later Futurphobia and also containing the slower-sounding Badlock, could be considered the trait d’union between his “old sound” and his “new sound”.

Hunter is probably one of the most convincing episodes of this new release, thanks to its compelling change of tempos, as well as to its fast and frenzy grooves. The album showcases the variety of the range of styles the musician is into, thanks to episodes such as Widow system, the result of a new direction followed by him. The sounds here used clearly recall those used in >_Run, the Futurphobia’s opener, adding a hard beat, a slow tempo and female vocals, while sounding convincing. As proved by the banger Wat-ware, Gore Tech is also showing interest in the field of industrial techno, showing his more incisive, 4/4 straight technoid side, well succeding in doing this.

If songs such as Pathogen slumber and Division sound like a more reasoned and slower version of what was done in the past, the last songs show a crescendo of syncopated broken beats, fast tempos, precise and engaging, dancefloor-ready beat patterns (Net terminal gene, Thermoptics). The ending song, Dawn marker, sounds atmospheric, dystopic, recalling the opening song. A perfect ending.

Geist Fibre is an all-embracing experience, more like a meeting of gears than the result of the work of a human being. Gore Tech’s music is the result of a man-machine, to quote Kraftwerk, showing all his energy and the phisicity of the human being while playing live. Geist Fibre is a hard-hitting, banging, powerful, hard transposition of the world we live in, in music, a catalyst of the artificial visions we experience mediated by our vanguard technologies, a work representing well our Zeitgeist. Another very good release by Gore Tech, who has already started to bring on live performances the results of his efforts.