Published by Alessandro Violante on November 2, 2022 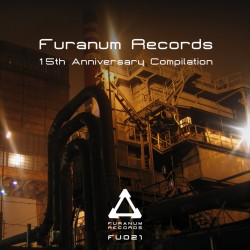 The history of a certain kind of industrial techno sound is made of several pieces of a puzzle. This is an history of contamination of sounds and of visions. Nowadays, it doesn’t make sense to consider techno and industrial as separated music genres, as this separation wouldn’t portray the zeitgeist. Today, the word “industrial” is used more to describe a concept than a specific music style, as it was in the past.

We’ve been writing this since some years, and we write it again here talking about one of the most interesting branches of the current underground scenario, Furanum Records, run by Dominik Müller, which started 15 years ago. With its radical and uncompromising approach, the label has always focused on what can be considered as industrial, both musically and conceptually. This is an approach in some way conceptually shared by the early industrial music waves of musicians.

This year, the label is celebrating its fifteenth anniversary with two festivals and the tape release we’re talking about in this review.

The first event took place in May in Suicide Club in Berlin, while the second will take place on 19th November in Riga. During the first event, some of the current most important artists, such as Huren and Sirio Gry J, played alongside more recent interesting musicians such as Fangarm together with Nobutaka Shomura and Vū with his project SKUV (in collaboration with Skrei). During the second event, Sirio Gry J, Fangarm, SKD and Dominik Müller will play.

These musicians are only a part of all the musicians who have released their songs of Furanum Records, such as Tomohiko Sagae, Coan and Uncto (a collaborative project between Dominik Müller and Rafał Fürst). Some of these artists have their personal background. For example, in Latvia, SKD is involved in STURM label; in Berlin, Sirio Gry J runs the label Monolith Records, and he’s a member of the Liber Null collective. Some of these musicians are connected with each other and collaborate on their respective labels, as parts of the same network would do.

In 15th Anniversary Compilation, released on tape and digital formats on 6th May 2022, the listener will find a portray of a multifaceted and polyhedric network of connections between a huge number of different musicians. There’s Sarin who runs his label X-IMG; there’s Katran, the solo project of Darko Kolar of Ontal; there’s Ryuji Takeuchi and his projects Hue Helix and Local Sound Network (LSN), besides the aforementioned artists. The compilation includes 21 songs, requiring to the listener a certain attention and a deep listening experience.

The tracklist aims at constructing an experience within an industrial landscape dominated by factories as those portrayed on the artwork, starting with songs more focused on obscure and rarified atmospheres and ending with more beat-driven songs. This progression is a well thought example of how a multifaceted compilation should sound: not as a simple collection of songs, but as a release with a clear identity.

15th Anniversary Compilation is a complex and articulated release having an important role in the story of the label.