Published by Davide Pappalardo on August 21, 2019 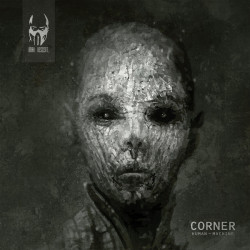 Corner is the industrial hardcore project of Russian producer Viktor Mihetko, a recent addition to the roster of cult Dutch label Dark. Descent. – founded in 2006 by The Relic (Maurice Pinkster) in order to pursue modern and forward-thinking hardcore techno music with industrial and experimental traits. He has already published for the label a 4-track digital EP called Mind Virus in 2017, and previously he was featured on labels like Traumatic and Spirit Of Progress.

His first full album Human Machine is presented in digital and a limited Cdr version, a collection of 10 (20 in the digital version) tracks redefining industrial hardcore music with elements from doomcore, techno, acid, and dark ambient soundscapes. The result is a work going well beyond simple club numbers, establishing an imposing and perfectly designed atmosphere and character while not forgetting the harsher and pounding side of things.

Blind dog is a perfect example of the music on the album, starting with hammering kicks and grim atmospheres and then adding hypnotizing rhythms and shrilling industrial elements. A crawling dark techno theme climaxes in throbbing synth sounds and sci-fi snare-drums, while different kinds of movements concur to an obsessive soundscape. Logical failure features even harsher and more acid effects, a track supported by layered and squelching synth sounds, as well as by train-like distorted kick-drums and sharp, abrasive touches. Time is suspended in an eerie and frightful dimension in which mysterious effects evoke lovecraftian nightmares.

Systeemfout showcases straight drums and deep bass sounds, following a creeping route with cut-off passages and industrial-core broken beats. A sort of mutant tribal dance for an apocalyptic world, the episode is a well-thought game of suspense and sudden changes of direction – during the second part of the track we meet grinding bass-lines and old-school crescendos. Instability curve is a masterwork of dark sci-fi atmospheres and stomping rhythms underlined by syncopated structures and malevolent sounds. After the third minute a riffing line establishes a mournful melody which grows into an emotional refrain.

Resistive shell is a factory straight from hell, a mechanical hardcore affair with ultra-heavy beats and roaring engines. A violent sonic drama is on stage thanks to irregular rhythmic attacks and droning industrial effects, and riffing lines prepare us for an industrial hardcore obsession during the second part of the track. Fractured script uses cinematic samples and techno passages in order to conjure a dystopian world with throbbing synths and marching rhythmic patterns. A mid-tempo movement explores brooding soundscapes and enthralling pauses with dialogues and eerie atmospheres give us a narrative structure followed by stomping drums.

Not a stranger’s world surprises us with an ambient mood supported by prominent moody synth sounds and emotive soundscapes. Just like the credits of a sci-fi movie it gives us a sense of wonder and sorrowful peace after a not-so-happy ending, and the usage of nature samples with birds gives more power to the melancholic sound. The dehumanization of our world, a possible future with cyborg inhabitants, the struggle between man and nature, and man and his own soul – be it in a body or in a machine – these are the themes here evoked.

If the word hardcore techno makes you think about mindless club music, think again while listening to this work. A cinematic theme can be found in the tracks of the album, and the nature of the tracks themselves changes through the course of our sonic voyage without losing their cohesion. A strong songwriting and sound-design secure a professional output with a perfect production and mastering – let’s not forget the work of Mikhetko on albums like Xtematic‘s Another Way Of Wisdom and Battling Anomaly‘s Into The Rabbit Hole. Many techno-industrial artists – let alone hardcore ones – aim to achieve what we have here: a modern work of hardcore techno with industrial roots showing the real potential of the genre. Corner deserves to be known by many more people.