Published by Alessandro Violante on April 8, 2022 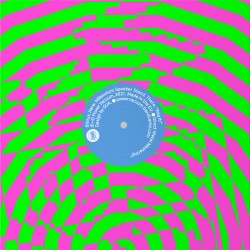 It’s been ten years since the English musician Milo Smee has started his label Power Vacuum, with which he’s published his music with several projects, from Bintus to Booze and to Invincible Scum. The prolific musician has released music also as 5 Mic Cluster, Chrome Hoof, Kactus, The Fear, Binary Chaffinch and Kruton, following the tradition, embraced by several electronic musicians, of exploring different sonic solutions with different projects.

In these decade, Power Vacuum hasn’t only published his music, but also that of well-considered musicians such as Scalameriya, Drvg Cvulture, VSK, An-I and Objekt among others. Power Vacuum is a multifaceted creature, and today we focus on its last release, made under the Bintus pseudonym, entitled Rag It! and released on vinyl on 28th January, containing two songs. Along the history of the sound of Bintus, always characterized by variety and richness of details, the project has explored several directions, from more 4/4 techno-like beats to complex syncopated rhythms. The common element of all his releases is his love for the acid sounds of Roland TB-303, not only characterizing his sound but that of the most part of the Power Vacuum releases.

In Rag It! we find a wide range of sounds known by the lovers of Roland iconic gear, from the aforementioned Roland TB-303 to that of its drum machines, especially Roland TR-909, evoking early rave sounds with a cerebral imprint. This element is strongly emphasized especially in the title track, whereas the sound of TB-303 dominates Millennium Speaker Stand. In ten minutes, Rag It! sums up the sound of Bintus and of his label.