Published by Alessandro Violante on July 19, 2015 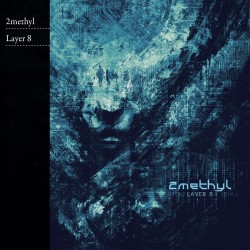 In a historic period in which the electronic sound, in particular way in the subcultural underground (but even broader) networks, is always more subject to a contamination process with the industrial music (post-industrial, for the purists), labels such as Nicolas Chevreux’s Ad Noiseam, almost always succeed in putting in evidence this process and in generating the best works, and if there’s more than someone who always more strongly declared that techno is the new industrial, he was probably right.

2methyl’s first album, Layer 8, is an album that succeeds in transforming the sonic drum ‘n bass matter, a genre that loads of people, until some years ago, considered out of date (especially thinking about its best 90’s artworks), into industrial music matter: it’s a work that perfectly catches the meeting of the two genres and that can’t be approachable neither with the Aphrodite or the Throbbing Gristle ways of thinking music.

In Berlin and, in particular, at Ad Noiseam, there isn’t interest in freezing in primordial and unmovable sounds because of the fear of losing the genre identity, it’s the opposite. The musician proposes us an album made by machines for machines, that now seems to have lost the relation of drum ‘n bass with the humankind, the dance, the tribalism, and that seems to embrace the cold and distorted non-music generated by the machines.

Nevertheless, the melancholic, more than apocalyptic, melodic ideas give to the nine songs an alienated shade (more than simply being obscure). These songs make us go to the abysses of the world of the machines, a world in which the production never stops, a production searched and gained by more or less conscious people that everyday use, more or less visibly, the levers of the market. That of 2methyl is, conceptually, a work that, even since its title, proposes itself as a cold and synthetic evolution of the hot 90’s electronic music (even if presenting very modern structures, dubstep or darkstep, as you prefer to call this genres), which nature is digital: the eight layer is, in fact, a virtual level of the OSI / ISO model, that describes the Internet communication protocols, and than the data transmission, fundamental computer science concept.

If we perceive this work as a digital work, a sequence of bit which lack any vital element, the eighth layer is commonly called “the human level”, because, after all, as well as the digital perfection of the bit can’t be separated from the human element, whatever kind of music can’t exist without the auditive apparatus of the listener that, without any doubt, will benefit from it, then the meaning of the 2methyl work is that, although the formal perfection of the music realized is unmistakable, a human listener, and than an interpretation of the music, will always exist.

This sort of conflict, the imperfection of the logic of the machines intrinsic in the final interaction by the user that, without any doubt, edit the behaviour of the “tool” he uses, be it music or software, summarizes the complexity of Layer 8 in a duality that characterizes loads of industrial electronic albums: that of man/machine. That of the musician is just the last starting point from which reach the same conclusion, and then in Layer 8 the synthetic formal perfection of the always changing as well as detailed rhythmic structures, be them very fast drum ‘n bass moments, massive mid tempo or more darkstep episodes, coexist with more melodic (and then human) ideas, hardly able to be composed by whatever kind of machine.

From a musical point of view, that obviously is what the listener is more interested in, Layer 8 presents an alternation of more or less changing moments, more or less fast, but which always share, even with their titles, digital / virtual world links: the Highway isn’t properly a physical street, but one made of millions of bits, Lab is the room full of buttons in which people (as well as who writes this article) transforms bits in letters and fuel the Internet, Mainframe is the engine, the propulsive center of the engine, from which all starts and to which all go back, that regulates the Matrix. So called void is the description of the abstract / virtual space, the so called void that is the space of the monitor that we watch to, in which images and characters are positioned according to complex algorithms.

Preceded by three songs shared as a preview, the mid tempo of Highway presents strong darkstep sounds sculpted on the lava stone, while Fragments is a perfect example of how the drum ‘n bass matter could be tamed, disassembled and recomposed in a sort of instrumental real song, that has lost its danceable structure, a smart process of reformulation of the genre that opens to new developments. One of the better episodes, although all of them are very well realized, is Stase, a song in which several musical forms perfectly coexist, in which a slow, darkstep-influenced rhythm speed up and transforms into a very fast and obscure drum ‘n bass for the inhabitants of the year 3000, an engaging song which has a very energetic and formally perfect propulsive thrust, which lacks any error, a condition that only the machine can intrinsically have. In the mid tempo of Lab the more human component of the project emerges, while Shelter is a perfect example of slow and engaging darkstep.

Going ahead, in the second part of the album, we find the really strong drum ‘n bass of Mainframe, grim and hard as few other episodes, and the intelligent synthesis of Resilience, a song in which well-chosen dub/darkstep ideas and fast drum ‘n bass rhythms coexist, with a particular attention for the piano melodic textures. The album is closed by the mid tempo of Dive and the obsessive and lopsided rhythmic of the last episode, So called void.

2methyl (known in the past as 2methylbulbed1ol) succeed, already in this debut, in creating an album close to perfection, in which the nine episodes, that someone, including me, can feel like too few, are even more than sufficient for showing another potential evolutionary way for electronic music. We hope that this approach could be considered, in the meanwhile the Maschinenfest has already done it, and this is a quality guarantee. A project that asks to be followed with care.