Published by Davide Pappalardo on February 12, 2020

Paralyze is a highly aggressive cyberpunk/industrial project hailing from Milwaukee, Wisconsin. A fierce sound and a full-front attack are the main ingredients in a ferocious attitude informed by punk, extreme metal and hard electronics. We had a chat with them about their music. 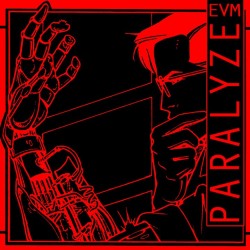 Welcome on Flux! Paralyze is a new name in the field of electro-industrial with noise and cyberpunk undertones. Would you like to tell us about it? How was it born?

Hello! It’s good to be hanging out in Flux HQ!

Paralyze was a thing I started kindof out of boredom with the music that was around me. I had been going to hardcore and punk shows for about 10 years, and the music at the time had just turned into something that wasn’t really my thing. I was getting into industrial, and the small scene in milwaukee, and a few weeks later found a broken keyboard in a neighbors trashcan. I fixed it up, and after that just kindof decided to start up an industrial project.

Your first output is the cassette Dissociative Prosthetic, a well crafted 5-track EP informed by aggressive EBM/industrial, dystopian atmospheres and even hints of power electronics. What’s the story behind it?

I started writing Dissociative Prothetic with a friend around 2016. I was still learning how to use electronic instruments at the time, coming from a more guitar/band based background. (And lets be real, I’m still learning). It was a pretty long process. The EP itself is a story of misanthropic transhimanism, where an individual with complete distain for society decides to replace his body with mechanical prothetics, and the mental and emotional effects that transition could have on a person, and larger society.

I think Millions of Dead Cyborgs masterfully crafts a sonic assault close in spirit to Spit Mask and Youth Code, but with an even grimier and unrelenting attitude. I would like to know about the conception of the track.

Honestly, I just really wanted to use the half-life crowbar sound over a blast beat, and see how I could incorporate it into an industrial song. The D-beat came with the blast, and the mid-tempo part and all the other elements were added to make the song a bit more danceable. I was definitley listening to more PV/grind bands when I was writing, but I do love Youth Code and Spit Mask. 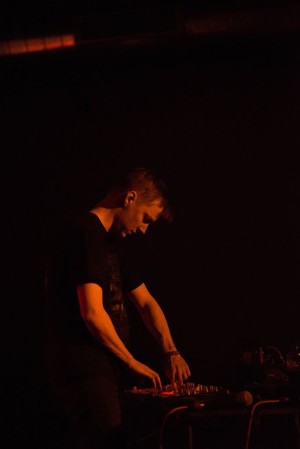 The label which published your cassette is Dissonant Society, an underground metal label with a roster made of death metal, sludge, doom, power violence acts. Your music quite fits the bill being aggressive and in your face, still someone could be surprised. How did you get in contact with them?

I’ve been friends with Zack that runs that label for a real long time. We did a distro trade with my old label stock when my old band played with his, and he ended up co-releasing my old hardcore band’s last ep. When he heard the new stuff I was working on, he really wanted to put it out, and I thought it was a good fit. Or, at least fun to work with a friend again.

America has recently experienced a resurgence of electro-industrial/EBM acts, some with their own twist on 80’s/90’s influences. There had been a sort of revival of coldwave with acts like 3TEETH too, while someone embrace elements from the techno-influenced European scene. A pretty various panorama, even if an underground one. Do you feel a kinship with it? Are there other acts you would like to recommend?

I would say so, I probably wouldn’t have had any interest in this sort of thing If I didn’t see people from the DIY/punk scene crossing over into it. Also, I love StatiqBloom, Street Sects, L.O.T.I.O.N, inva//id, and all the cool stuff coming out on vertex brain records.

Live shows: what about them? Your music sounds as an ideal candidate for live rendition. Do you enjoy playing live? What can we expect from a show of yours?

Everything that I do, I focus on the live experience first, and I hope my recordings have the same energy. Paralyze played out a good amount in milwaukee before recording anything. For live shows, It’s me and a table full of music equipment. I don’t really use a laptop to write or preform, so every sound you hear is being made by a physical instrument infront of me. I’ve also got an AV component I’ve made that runs with the show on a projector, that I feel adds to the atmosphere of the experience. 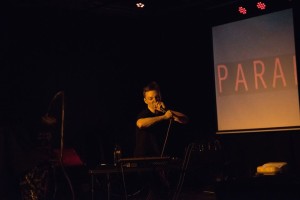 Dissociative Prosthetic was published in November 2018. Do you have any news about new material? What are your future projects?

I’m currently writing my next 5 song EP called M.I.N.C.E, hoping to have it released by summer 2020. I’m also lining up a split with a friends act after that, and maybe some compilation exclusive songs. It’s taken me a while, because I’m trying to do this next record on mainly DIY gear, and built a new sequencer, and developed a new sampler for the project. All of that was complete for the most part at the beginning of january, so now I’m just trying to focus on writing. The sampler will be availible as a kit to build around the same time the EP comes out, and will be pretty competetive with other hardware samplers on the market at it’s pricepoint.

Thank you for you time. Anything you would like to add for our readers?

No, Thank YOU. And thanks to anyone reading. If you want to check out progress on my music or my projects, you can check out my instagram https://www.instagram.com/halford_c/
And if you’re a huge nerd and want to check out the github for the development of my sampler, (or get ready to build it yourself) you can check that out at https://github.com/BrutalistInstruments/Tsunami-CS-1. I just updated everything yesterday.